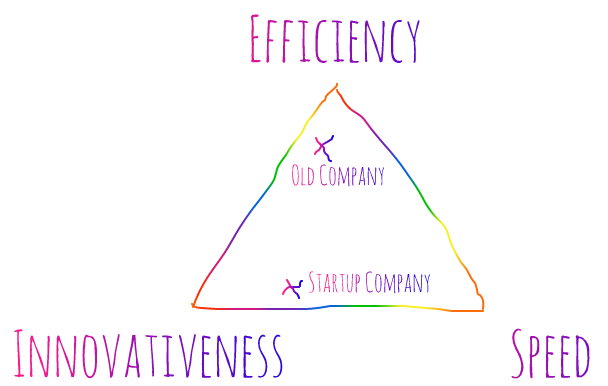 50 years ago products could be sold easily because there was little competition, so innovativeness and speed were less important than efficiency, and the return of investment (ROI) was mostly influenced by efficiency.

Today founding a company is easier than ever before and the worldwide competition demands a very high efficiency for having a competitive pricing. But … only the very attractivest value propositions and only the most innovative solutions have a chance to stand one’s ground against the ever growing competitors. Therefore focussing on efficiency alone leads to failure. A tradefoff has to be made between efficiency, innovativeness and the speed of rolling out innovations. So success means, that the magic triangle depicted above must be addressed strategically. (I never saw this triangle before, maybe it’s been discovered already, maybe I’m the first one, please add a comment below it there’s more about this approach to find anywhere allready).

And here’s why old companies fail on innovation and the speed of launching innovation sooner than other’s. Old companies are too efficient ! After years and years of optimizing every bit of the company for efficiency, the place in above’s magic triangle became inferior for today’s fast moving markets. And that’s why startup companies can beat bigger companies, why big companies found spin-off’s etc.

So, how you gonna solve this: Fuck efficiency !

In order to get a better place in above’s triangle, you need to sacrifice all what you achieved over the last decades. And this is difficult, because it can only be achieved by a cultural change. The most important dogma for all actions has to be changed and people will not understand what’s going on and why. Cultural change is one of the hardest and long-lasting challenge a company might ever face, and chances are high, companies will fail on that, keep their position in the triangle and go under.

So, don’t go under, follow the boy scout’s rule of innovation: Reduce one bit of unnecessary efficiency every day.

Careful, efficiency is still very important and the areas have to be selected very well.

You may have missed

What programming language to learn?

How to Hire the Best Python Developers?